This place is one of the richest in terms of preservation of culture, because of its loyal and honest people living here. This country surpassed most Asian nations in terms of economy in just about 50 years. This fact truly proves that the Japanese are people that love their country and are willing to die for their cause.

But recently, this country on the Southeastern Asia has experienced a tragic event which shook the whole world. A high-intensity earthquake struck Japan that almost destroyed its nuclear power plant.

This is a challenge for them to rise up and continue with their development. This country, aside from its rich economy and culture, also provides wonders that nature made. Here are some of Japan’s natural wonders. 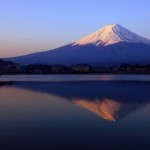 Located almost in the center of Japan, this mountain is the highest in the country, with height reaching in about 12,300 feet. Since ancient times, Mt. Fiji has become a place for worship, and a lot of folk legends relating to the mountain.

The most wonderful attraction that Mt. Fuji provides to the tourists is the changing of its view in each season and even in every hour of the day. The peak of the mountain becomes snowy when winter comes and when it is summertime, it has a crown of snow in the torso of the mountain.

Mt. Fiji is a great place for climbers that want challenging obstacles and breathtaking views.  Mount Fuji is the pinnacle attraction of Fuji-Hakone-Izu National Park.

This is found in Mukuni Town, Fukuni Prefecture and belongs to Echizen Kaga Coastline Quasi-National Park. This is a wonderful 30 meter rugged cliff that is made by the non-stop waves.

The shapes of the cliff range from pentagonal and hexagonal columns that are usually called a columnar jointing, and can be only found in three places throughout the world. – Korea, Norway and in Japan.

The name Tojinbo came from a legend that tells about a Buddhist monk that was pushed down the cliff because of a complicated love affair, and that event caused a rampage of strong winds and waves that shaped the cliff.

Lake Mashu
The crystal clear water and the mist that surrounds Lake Mashu are one of the features that this place is known for. The visibility of the water of the lake reaches to 137 feet which is a world record. Heavy mist shrouds the lake and this is why Lake Mashu is considered the mysterious lake, which is hidden and out of reach.

In the center of this lake is an island that is actually the peak of a lava hill that runs down 230 meters below the surface of the lake. And another mysterious thing about this lake is that it has no rivers flowing in or out, but the water level is still the same throughout the year.

Frost Covered Trees in Mt. Zao
Another natural wonder of Japan that you will certainly find interesting is the trees in Mt. Zao that are covered in snow. The snow that covers the trees makes a shape that are entertaining, resembling humans and animals.

This is due to the cold wind that blows down from Siberia during the winter and when the wind passes through Mt. Zao, the moisture will form droplets and becomes supercooled. The trees that live there will be covered with snow and forms those amazing shapes.

Tourism has been increasing in this place every year because of the amazing skiing place and the splendor of the snow covered trees it gives.

Kamikochi
This is a highland basin that is surrounded by the Japan Alps and it spreads throughout Azusa River that will then comes down from Mt. Yarugatake. The autumn color of the trees in Kamikochi invites a lot of visitors that would want to take a break from stressful works.

The scenery of the mountains is also magnificent and the lakes scattered add up to the natural scene it possesses. Climbing mountains are also a good activity that one can do in this area. Kamikochi is a part of the Chubu Sangaku National Park and is made a Special Natural Monument.